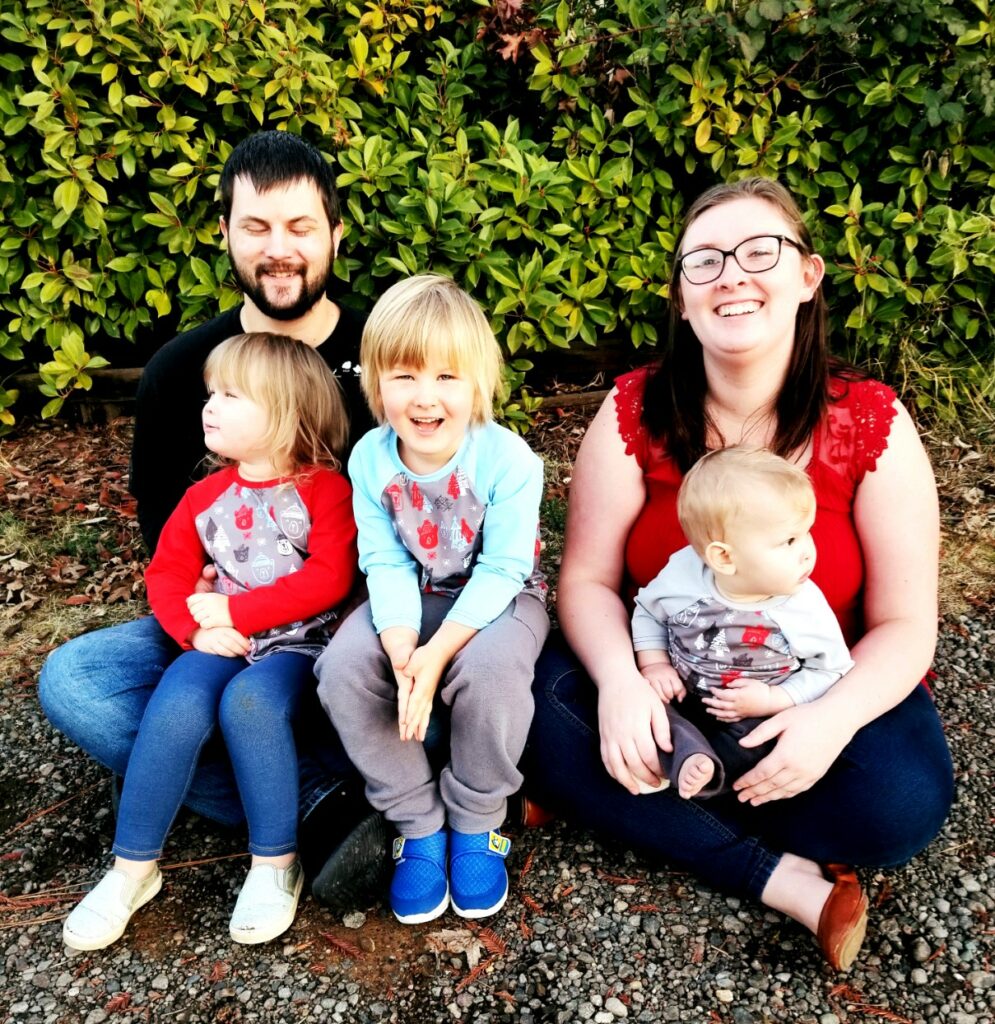 By Christie Klein
Special to www.JenniferMargulis.net

I had an unassisted home birth with my third child. Here’s my story.

I found out I was pregnant in May. I had my first prenatal visit with the best midwife in July. In August I found out that my insurance company cancelled their contract with the midwife, and because of that my midwife was going to lose 70% of her patients. She would no longer be able to make a living so she decided to move.

I was devastated. In September I had my first appointment with midwives associated with a hospital near my house. The care was mediocre. Just like with my first baby, delivered by an obstetrician at the hospital, I had no choice who would deliver my baby. It was the luck of the draw, with whatever midwife happened to be on rotation.

Deciding to have an unassisted home birth

Though I kept going to the midwives, I decided I wanted to have an unassisted home birth, or free birth, instead. It seemed like the logical thing to do, the next step in my crunchy journey. I felt like a good candidate: My pregnancy was uncomplicated, except for measuring 3-6 weeks ahead. I attributed the weight gain to being pregnant for the third time. My body knew what to do, and I trusted it.

But at 36 weeks pregnant, I was measuring 6 weeks ahead. The midwives wanted to do an ultrasound to see if everything was okay. I declined. In my gut I knew nothing was wrong. At 37 weeks, though, they informed me that I would risk out of their care if I refused the ultrasound. This meant that if for any reason I chose to go into their birthing center, I wouldn’t have midwives or access to their birth tubs. I would have to use the obstetrician on call.

Well, okay then. I decided I was fine with risking out and that we were done with prenatal appointments. No big deal, really. I trusted my body and my intuition.

We referred to the baby as Muggle. Muggle hadn’t dropped. The baby was still up by my boobs, having a grand old time kicking and squirming and enjoying living in my womb. My other two pregnancies were like this too so I wasn’t concerned. My first pregnancy went to 40+3 and my second to 40+0.

The morning of January 30th, 39+2, was pretty normal, but I had some discomfort because it felt like baby was engaging. More intense nesting kicked in. Perhaps it was finally time for my unassisted home birth to begin.

I felt different. I wasn’t in labor yet but I knew it would be soon. So I forced myself to stop cleaning the house and instead make the waterproof underwear I swore I’d make before this baby arrived. I am a seamstress and I sewed them myself. But after I, tried them on, and looked in the mirror the baby dropped and the baby was suddenly so low that I had to get on my hands and knees to relieve the pressure on my pelvis.

A lot of pelvic pressure

I was not comfortable at all, but there weren’t any contractions yet. I just had a lot of pelvic pressure. I put on pants and went to sit on the couch with my kiddos, boyfriend, and best friend. Once I sat down I started having some really intense cervical discomfort, but coming in waves.

Was this labor? It couldn’t be, there was no tightening, no rhythm. Or was there? I decided that I was going to time the waves for a little bit just so I’d know if we needed to get things going or not. They were consistently 1-3 minutes apart but they lasted only 30-40 seconds long. They were easy enough to get through. I set up my laptop to live stream to my closest friends, I sent my boyfriend to the store to get the rest of the items for laboraide and a kombucha. I texted another friend to let her know it might be time.

We started filling the inflatable fishy pool we had purchased and I got in even though it wasn’t nearly full enough. The contractions were hitting me harder and I needed to relax. My friend boiled water on the stove since our hot water heater has a very small capacity and the hot water in the birth pool quickly turned cold. At first my daughters stayed with me, but I sent them out into the living room with a friend because they were talking too much.

I switched between leaning forward on the tub and laying back against it. For the most part leaning forward was more comfortable. And then I tried laying on my side and that was comfortable for quite a while. I got up to go pee, waddled into the bathroom. The contraction I had on the toilet slammed into me full force. It was awful. I needed back in the tub!

Back in the tub I decided to lean forward for another stint of time and that was comfortable. I ate a jerky bar and drank some coconut water and chewed on some ice. My boyfriend was finally done making dinner and came in and that’s when things really changed!

I wanted out of the tub during my unassisted home birth

As soon as I held his hand I wanted to get out of the tub and onto the bed. I went to the bed and laid on my left side, just like I had with my second baby. I don’t know what time it was, but soon enough I needed my friends to apply counter pressure and I was having a hard time maintaining deep tones.

My voice became higher pitched as I tried to explain where I needed pressure to be placed at the height of contractions. I knew I was close, especially as I began to get contractions that forced me to push. I think it was the second pushy contraction that led to my water breaking, flooding our bed (which had a waterproof mattress cover on it, but no towels at that point ) and, man, there was a lot of fluid.

My legs were slimy with amniotic fluid and I quickly reached down to ensure that I couldn’t feel the cord. At that point the head REALLY engaged. Soon after I began shaking uncontrollably, a sure sign of transition for me.

I told my friend I was okay because I was sure she thought I was having a seizure, which is what I thought when I started shaking during the birth of my second baby. I then announced that I needed to get on my hands and knees SOON but to not do anything until I said so. I think 2 or 3 contractions went by before I mustered up the strength to move my body.

I got onto my hands and knees and the head started crowning. I was very mindful of the fact that the baby didn’t slide right out and so I breathed baby down, taking an ever-so-slight pause when I felt that “ring of fire” everyone talks about. I let my body stretch and the head came out.

At that point my boyfriend was behind me and yelled out, “You’re doing a great job, Genna!” He was so used to encouraging our oldest, Genna, that her name slipped out instead of mine.

My body was still pushing and I felt baby coming. My boyfriend, again, said, “You’re doing a great job, Genna!” and I laughed to myself.

The next thing I knew the baby shot out, in a gush of amniotic fluid! Oh that sweet cry!

Unassisted home birth: We did it!

We had our unassisted home birth!

I started crying. I carefully moved my leg so I could lay down and hold the baby. I cried a lot. I held on tight and looked at my sweet baby’s face. We cuddled for a long time. Finally someone asked if I had looked to see if the baby was a boy or a girl. I hadn’t! It hadn’t even occurred to me to check. So I looked. A BOY! WE HAD A BOY!!

I cried some more. I had felt that the baby was a boy throughout my pregnancy and I had always wanted to be the mother of a son, since before I even had kids. It was one of the happiest moments of my life..

We left his beautiful cord alone. It was long and purple and the most perfect spiral.

Large clots before birthing the placenta

I started having large clots come out before birthing the placenta. I could feel the placenta was ready to come out and I consciously pushed. Because of the blood clots, I took some shepherd’s purse. This is an herb that midwives use to stimulate uterine contractions during active labor and to help expel the placenta and help the uterus contract back down to size post-partum.

After the placenta came out, we paid attention to the bleeding. Everything seemed fine! I was alert, not dizzy, not fuzzy, just thirsty. The bleeding was fairly minimal.

The baby and I stayed connected for a long time. I’m not sure exactly but I think I cuddled him skin to skin for at least two hours. After that, we tied his cord off with a crocheted tie and cut it with pocket knife scissors.

We weighed the baby and he surprised us all. He was 10 pounds 1 ounce! My biggest baby yet! He was 21.25″ long and had a head circumference of 37.5 centimeters. A big boy for sure!

I didn’t tear at all. I wasn’t even sore after 12 hours. From start to finish this unassisted home birth lasted only 3.5 hours. It was intense, for sure, but I wouldn’t have changed a thing.

These days Winston is a rambunctious and energetic yet deeply empathetic and loving little boy. He loves giving hugs and kisses (over and over and over), chasing his sisters around the house, and squealing at the top of his lungs. He likes riding his little tricycle and going to the park. He drinks raw cow milk, loves kombucha, goat cheese, veggies, and “helping” in the kitchen. He recently weaned from the breast and potty learned and still prefers to cuddle next to me every night.

About the author: Christie Klein is a 27-year-old mom of three and small business owner. A native of Southern California, has found her home in Southern Oregon. She enjoys painting with watercolors, all things Harry Potter, and gardening (even though she has a black thumb). Before having kids she competed in community pageants and spent a lot of time volunteering to better her community. Now she fights for medical freedom and regularly encourages women to take control of their birthing experience.

More unassisted home birth stories:
Why This Alaska Mom Wanted to Birth her Baby in a Lake
An Unassisted Outdoor Free Birth
An Unassisted Home Birth in the Bathtub

« Vaccines During Pregnancy: How to Say “No, Thank You” to Your Doctor
Peter McCullough, M.D.: “We Have a Crisis of Compassion in Medicine” »