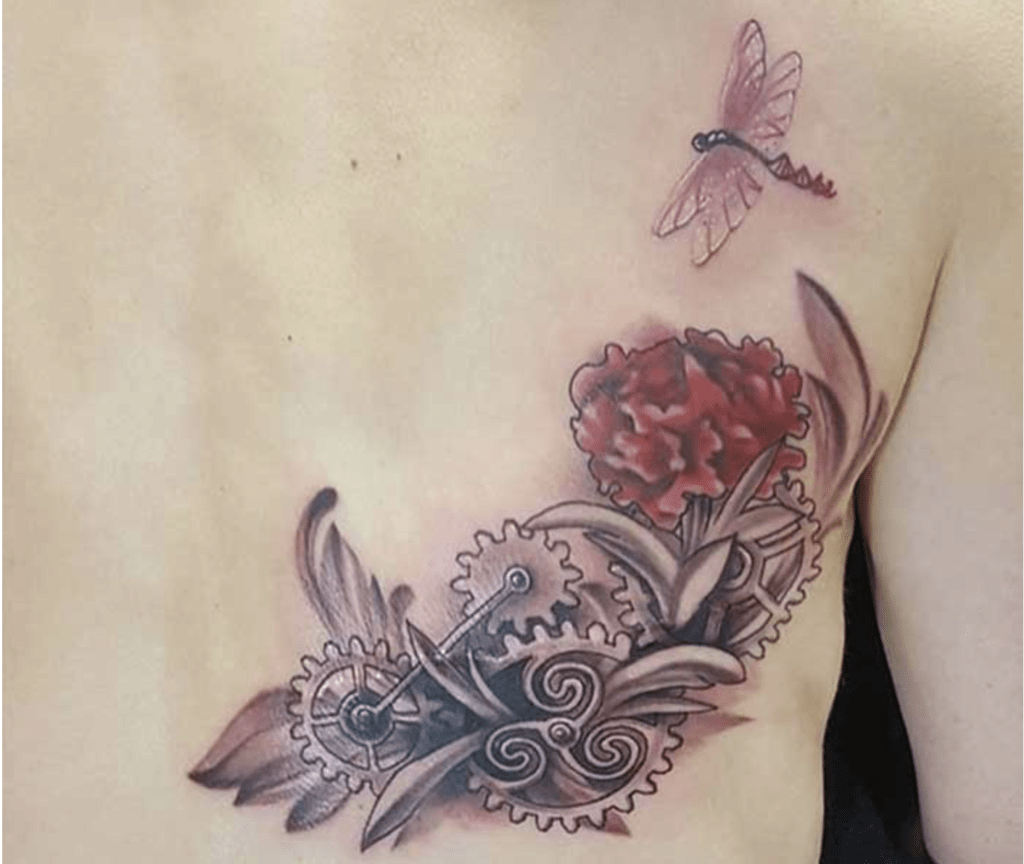 About 1 in 8 American women, some 12%, develop invasive breast cancer at some point in her life. Photo of a steampunk dragonfly mastectomy tattoo by Stacie Rae Weir.

Aluminum and breast cancer. Is there a connection?

Just last week a woman in my town, born on the same day I was, died from breast cancer. She was 51. A few days earlier my friend and colleague, John Darling, passed away from inoperable liver cancer. And my friend Jolie Elan died just seven days after she was diagnosed with stage four ovarian cancer. She was also 51 years old.

I hate cancer. It takes far too many of our best and brightest far too soon. It’s devastating.

And I especially hate breast cancer

As someone who started menstruating at age ten, I’m considered “increased risk.” But even if you’re not genetically susceptible to early-onset menses or your endocrine system wasn’t disrupted in childhood, breast cancer is one of the most common cancers today. A little known and particularly horrible fact: men, too, can get breast cancer. Since the mid-1960s, we’ve seen an unfortunate and relentless upward trend in breast cancer.

Aside from skin cancers, breast cancer is the most common cancer in American women: one in eight will be diagnosed with it in her lifetime. That’s a rate of one breast cancer diagnosis every two minutes.

What is cancer anyway?

Cancer is any uncontrolled growth of abnormal, malignant cells in the body. In breast cancer malignant mammary cells cause tumors in breast tissue.

Cancer arises when the immune system doesn’t recognize these abnormal cells and eliminate them. You can also get cancer when an environmental factor “transforms” normal cells into abnormal cells, causing the cells to divide more rapidly, or reducing the body’s ability to stop cell division, or both.

You may have heard of the “breast cancer genes” BRCA1 and BRCA2, but did you know that the vast majority of breast cancer is environmentally induced?

In fact, approximately 75-80% of all breast cancer is due to environmental and lifestyle factors. These include “hormone exposure, alcohol consumption, and obesity.”

But even those factors are responsible for only a small portion of breast cancers. The truth is we still don’t really know or understand what the most important triggers of breast cancer are.

Researchers have long suspected that aluminum could be a big player in the ubiquity of breast cancer. Particularly the aluminum in commercial antiperspirants, which are known to contain high amounts.

Aluminum has no known use in the human body. It is toxic to many biological systems and organs, including the brain and the kidneys.

Retrospective studies, including this one, this one, and this one, have linked aluminum and breast cancer, specifically the early use of aluminum-containing antiperspirants with the development of breast cancer. But these scientific studies, while important, were limited by small sample sizes and lack of unexposed controls.

Which is why an international team of researchers headed up by Stefano J. Mandriota, Ph.D., a leader in breast cancer research based in Switzerland, wanted to find out if aluminum, especially the aluminum in antiperspirants, is contributing to the explosion of breast cancer incidence in recent decades.

Mandriota and a subset of his team had previously studied the effect of long-term culture of mammary cells in aluminum salts. For that research, they used concentrations of aluminum similar to the concentrations found in breast tissue of women in industrialized countries.

But most breast cancers develop in women with healthy, normally functioning immune systems. So the scientists needed a way to determine whether aluminum-exposed “transformed” cells also cause tumors in animals with intact immune systems.

To that end, as they explain in a study published in December 2020 in the International Journal of Molecular Sciences, these scientists cultured mammary cells in AlCl3 solutions for the experiment and in plain water for the controls. They then injected these cells into normal mice.

The results: Nine out of ten and eight of ten of the mice in the two groups injected with aluminum-cultured cells developed invasive carcinomas, while none of the control mice got cancer.

These results suggest a clear and causal link between aluminum exposure and breast cancer tumors, as well as other forms of cancer.

As another essay that was part of the experiment, the mice were injected differently. The results were similar: Three-quarters of the mice injected with aluminum-exposed cells in this case developed tumors, while the five control mice remained tumor free.

What is less clear is how aluminum transforms healthy cells into cancer. 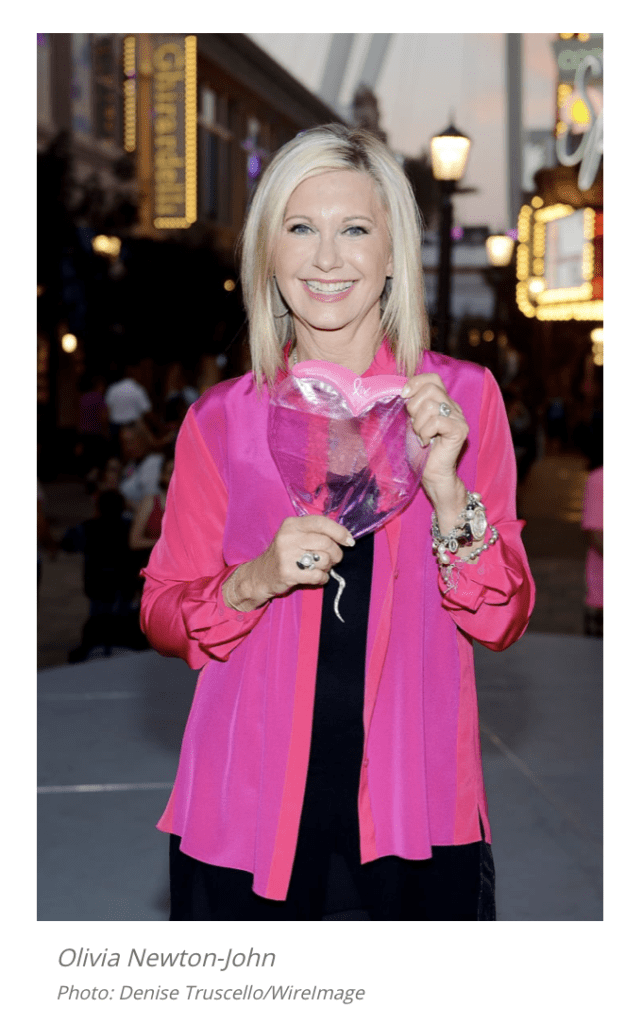 Actress Olivia Newton-John has survived cancer three times. Is there a connection between aluminum and breast cancer? New science shows there is. Photo by Denise Trucello.

How does aluminum cause breast cancer?

The researchers then analyzed the genomes of the cells before and after the aluminum exposure. When they did this analysis, they found consistent increases in chromosomal rearrangements.

So the next question was whether these chromosomal rearrangements caused the cell’s transformation or were a result of it.

Do chromosomal rearrangement cause cancer?

Cellular transformation requires long-term aluminum exposure. To determine whether the chromosomal rearrangements happened before the cells transformed, the researchers looked at the chromosomes after short-term exposure. At 24 and 48 hours.

They saw a consistent increase in several types of chromosome damage in a very short period of time. These results indicate that aluminum exposure induces genomic instability in mouse mammary cells, leading Mandriota and his team to conclude that aluminum causes direct damage to chromosomes, which makes this a likely mechanism for the transformation of normal cells into cancer-causing cells.

Aluminum toxicity in the brain

The same study discovered something else surprising. The scientists:

“observed consistent and significant upregulation (ranging from 3.6- to 17.3- fold) of autism susceptibility candidate (Auts) 2, a gene involved in neuronal development and in several psychiatric disorders…” leading them to urge further investigation “in view of the known neurotoxic effects of aluminium.”

As someone who has been researching possible causes of the increasing neurological damage we are seeing in America’s children, I am concerned about aluminum, as well as about the synergistic effects of aluminum in tandem with other toxins, like glyphosate.

Indeed, a growing body of research is shedding light on the role aluminum, and the aluminum adjuvants in vaccines in particular, is playing in the autism epidemic. The aluminum-induced upregulation in a key “autism gene” these researchers discovered while studying aluminum and breast cancer may help explain how aluminum is contributing to neurological disorders.

So what do we do now about aluminum and breast cancer?

Virtually every major brand of deodorant and antiperspirant still uses aluminum compounds in America. In Europe the situation is changing and aluminum is being taken out. These aluminum compounds are toxic to breast tissue. But even so-called “natural” brands (like Tom’s of Maine) in America still contain aluminum.

You can stop using deodorant or make your own with non-toxic ingredients.

While it’s true that ingesting aluminum is different from rubbing it on your skin under your arms, it’s best to avoid aluminum exposure as much as you possibly can.

Make sure to never buy baking powder that contains aluminum. Read the ingredients and buy aluminum-free.

And get rid of aluminum-containing cookware. Choose glass baking dishes instead.

If we want to live cancer-free healthy lives, we have to reduce our exposure to aluminum and other toxins. Our lives depend upon it.

Related posts:
20 Ways to Limit Toxic Exposures
Glyphosate and COVID-19
Wondering About Vaccines, Not Sure Where to Start?